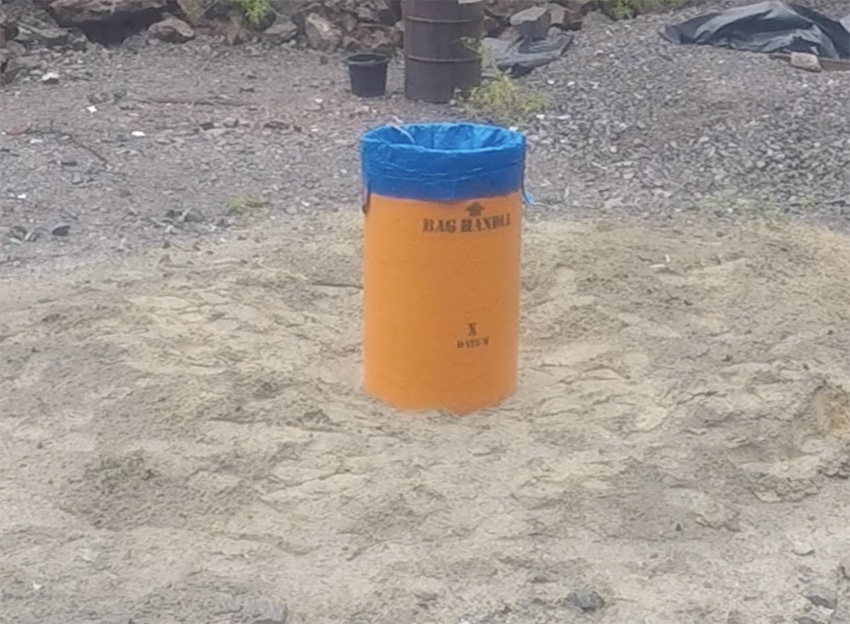 Take an ASL GRP standard 500g rated Blast Containment Bin with a heavy duty plastic parcel liner and place within it a nail bomb consisting of 500g of plastic explosives and 1kg of 2” steel nails (over 1000 in total) wrapped around the charge. The bin was placed on to the test site without the use of a base and was not fastened to the floor in any way.

Pressure sensors were placed at 2 & 3m from the charge to record the blast pressure which might be experienced by a human standing within close proximity to the bin. These gauges measured reflected and incident pressure rise.

The pressure sensors were initially tested against a bare charge of 500g explosive which demonstrated that even at 5m the blast pressure was sufficient to cause lethal lung damage (death via pulmonary embolism and blunt force trauma).

With the bin in place not only was all the fragmentation contained, but the blast pressure received at all sensors was below the threshold level of lung damage meaning that any users in close proximity to the bin would survive the event and be able to escape. The bin jumped vertically and fell on its side exactly where it had been placed, neither the bin nor any fragments were propelled out of the trials area, all combustion products were propelled upwards.

A second trial was conduced on the damaged bin using a 750g bare HE charge. This was successfully contained by the bin, however the surface cosmetic coating of the bin had fragmented away in a number of places due to deformation and tearing of the blast resistant material. Had the bin been new, it would have withstood at least a 700g charge placed fully into the bin.

Our testing is carried out in conjunction with Hephaestus Consulting.