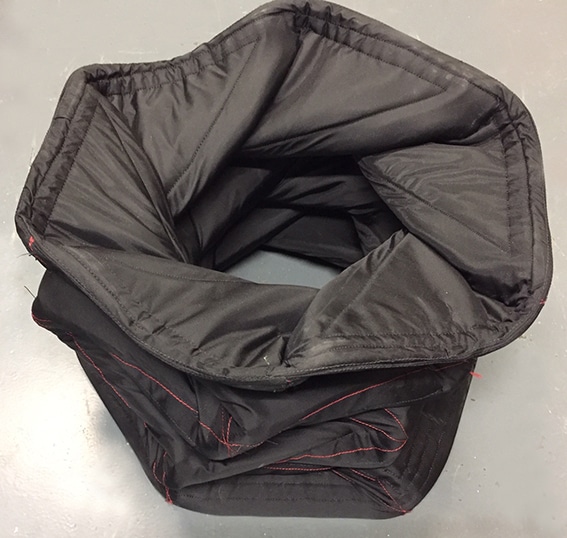 Having the right equipment is crucial to frontline services.

However, far too often critical pieces of equipment have to be produced with design compromises which can make life for the operators more challenging than would be idea.

From the police force, fire department, security services or bomb squad (EOD – Explosive Ordinance Disposal), being able to act quickly is of vital importance. It is not possible however to carry every single piece of equipment that might possibly be needed at any one time. Irrespective of financial pressures most emergency response vehicles operate at maximums of payload and internal volume, with the latter – volume, being of particular importance to rapid response security and EOD operators.

IEDs (Improvised Explosive Devices) have become a much more common security threat and can take many different forms. Globally the general public are urged to be more vigilant in the reporting and detection of suspicious objects. Various extremist groups as well as ‘lone wolf’ single individuals have used IEDs in numerous forms to terrorise civilians and governments.

The explosive threat to the general public is wide ranging and can include home made explosive mixes (such as those seen in the London and Boston marathon bombings), illegally obtained military ordinance such as hand grenades such as the Yugoslavian M75 grenade encountered often by Police in Sweden). From a simple pipe bombs to a more complex device most IED’s can be easily transported in a vehicle, carried in a backpack, delivered in a package, left in baggage. However the device is transported or placed, the uncontrolled detonation of an IED can be devastating.

Not every suspect package or bag is a threat, however this cannot be known until the area as been cleared of civilians and made safe. Only then is it appropriate for an specialist EOD team to approach, investigate and if required make safe the device. Containment devices are used to reduce the risk to building staff, the general public and the EOD operators themselves. In mail-rooms or package handling facilities large ‘bomb-bins’ may be employed to provide a secure location for the potential device. This is especially important within office and industrial buildings where the close proximity of people, walls and ceilings amplify the potential lethality of any explosion.
Historically containment devices for suspect items or explosives have been rigid and either a of composite or steel structure. These certified items, although proven to increase protection and survival levels, can be large, bulky, heavy, and not particularly manoeuvrable. They also can also take up valuable space and are not well suited for swift deployment and storage.

With these challenges of portability, deployment and storage in mind, UK manufacturer ASL GRP has developed a novel Fold Flat Blast Container. The company now in its eighth year of trading, supplies blast, ballistic and fragmentation protection products to the UK, and exports across Europe and Southern Asia. ASL GRP’s inventory of blast protection includes high threat, rigid blast containers, lightweight blast suppression blankets as well as protection systems for vehicles and vessels.

The ASL GRP folding blast container is a lightweight, easy to assemble and store containment vessel. Its exceptionally small stowed size makes it possible for the performance of a rigid containment device to be offered with the portability of a flexible blanket. The compact nature means the Folding Blast Container can be carried by existing first responders to make safe any suspect package or bag. It can be easily stored as part of a public spaces (such as railway/metro stations, airports etc) emergency response equipment, and it can also be used within an office environment either replacing a fixed blast container or used as a mobile device able to be taken to wherever in an office complex a suspect letter or package may have been discovered.

The foldable container enables the user to contain a suspect explosive device while awaiting the arrival of a bomb disposal team. Designed to withstand and contain blast and fragments from an explosive device containing up to 200g of PE4, the product is flexible and considerably lighter than a standard Blast Containment Bin.

When folded into its storage position, the container will fit in the spare tyre compartment of a vehicle. This makes it ideal for the emergency services, security / defence units or large capacity venues and events.

Fold points are indicated on the blast container, stitched in red. Quick pressure should be applied to the centre ring diagonals, which naturally makes the container twist. Repeat the process until all three ring sections have collapsed. Apply pressure to the top of the folded container to compress further.

As with the rigid blast container, the folding container is designed to absorb a blast and contain any fragments that may be emitted by an IED (improvised explosive device) and directing blast and combustion products upwards. An uncontained blast would force outwards, therefore inflicting injury to bystanders. By forcing the blast upwards, damage is limited to the surface beneath the container. As well as this ASL GRP has demonstrated the significant reduction in blast pressure alongside the bin compared to an uncontained explosion. This is vital as the overpressure from an explosive event can cause just as much injury and death as fragments from the device itself.

The soft armour department at ASL GRP designed and developed the folding blast container using woven flexible Aramid material. Aramid is a very high tenacity man-made fibre, one of the strongest in existence. It has excellent abrasive properties and resistance to heat. This material is commonly used in ballistic body armour for police and military services, in the ballistic and blast protection of vehicles – in door apertures, under floors or behind engine bulkheads, where it is difficult to fit rigid protection. The same materials are also used in the manufacture of blast suppression blankets. A process of specific folds, stitching and layering developed over years by ASL GRP’s specialist team, combined with stitching and a nylon casing, enables the folding container to be easily retracted from its standing position. In the case of finding a suspect device, the container should be in the full upright position, placed over the device, with the device sitting centrally.

To further supress an explosion contained within a flexible, or standard, blast container, a blast blanket may be placed over the top of the container. In the instance of an explosion, this blanket would provide further protection from the blast being omitted upwards.

What are the benefits of the folding blast container?