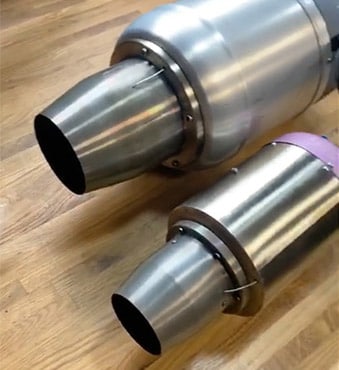 Alongside our vehicle and marine armouring, we have been working on a solution for the groundbreaking team at Gravity Industries. The Gravity team have designed and constructed the first fully functioning Jet Suit. Powered by cutting-edge technology, this suit makes human flight a reality (well, for some!). Flying the Jet Suit is no mean feat, trust us, we have tried and failed! So, we leave the flying to the experts. Gravity have flown at over 100 events worldwide since the company’s launch in 2017. 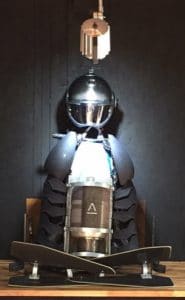 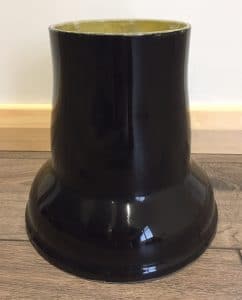 Our job is to manufacture protective cones that encase the gas turbines, that will protect against any fragment/debris that may occur in the unlikely event of mechanical failure. We are still in the design and tweak phase, making adjustments for weight, thicknesses and shape.
We have looked at creating cones for the two jets that are positioned on the arms of the suits, and also the larger jet at the back of the suit. Weight is an important factor in the design of the cones. The suits’ components need to remain as light as possible, whilst retaining strength and retaining functionality (ie protect from any fragmentation). The Gravity team have already trialled the first cone on a Jet Suit, and we shall be running ballistic testing in the coming weeks.